Semi-finalists at the 2020 International Blues Challenge in Memphis TN, recording at the legendary SUN Studio and a new incredible live album to launch, word keeps spreading about this formidable act.

Just before the pandemic hit globally, Australia’s hottest act on the blues and roots scene, scored a recording session at the legendary SUN Studio, home to Howlin’ Wolf, B.B.King, Bonnie Raitt, Elvis and more. During a visit to the museum, Tim Neal (keys) sat at Jerry Lee Lewis’ piano and pricked up the ears of the studio engineer who invited the band to record in the hallowed studio. A 5-hour late night session saw the band lay down 12 incredible tracks: blues and soul originals, rare covers and a few golden choices the band had never played before, inspired by the history of the studio that seeded so many pivotal careers. You can even hear in a quiet brooding moment of a spontaneous version of ‘It Hurts me Too’, a ghost walk in and close a door, behind which there was no one.The electricity was alive that night and all was etched to tape. 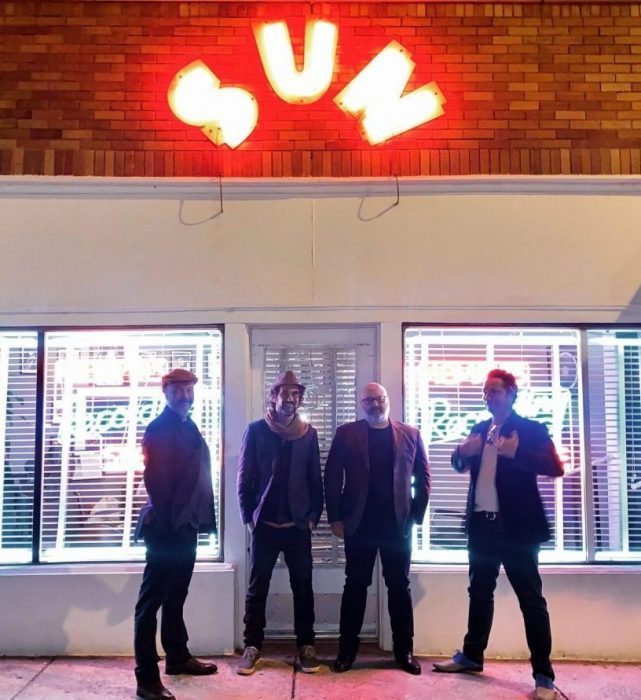 With a history of having played with some of Australia’s best blues exponents such as Rev. Mick O’Connor, Ian Collard, Jeff Lang, Broderick Smith, Steve Teacle, Richard Tankard, Andrew Ogburn, Garrett Costigan, Nigel MacLean, Dave Boyle (USA), this current line-up is at its responsive best, boasting world class musicianship and raw unbridled passion inspired by the moment’s music to create seemingly rehearsed pieces out of nothing but great listening and reaction skills.

Ever since their famed seven-year residency at the Great Britain Hotel in the early 90s, many budding young musicians have cut their blues teeth with the uncompromising fire of this band’s energy. Checkerboard has inspired the development of some of Australia’s finest musicians and bands (Powderfinger, Dirty Three, Clare Bowditch, Jet, Spoonful/Rocket Science, Kylie Auldist, to name but a few). Checkerboard’s point of difference has always been playing with a myriad of musicians and throwing them into the improvisational hot-seat. Many have come away from a first time playing with the band saying things like “That was the most fun I’ve ever had playing live music” (guitarist, Co Tipping)

You could run a small city off these guys – Fiona Boyes

A Dynamic Soulful Well Of

From deep within the veins of Melbourne’s music scene, Checkerboard Lounge has become a cult-like underground institution. The brainchild of renowned singer and drummer Carl Pannuzzo, the band has evolved over thirty years; breathing fire, virtuosity and improvisation into classic soul and roots originals.

Mischievous and unyielding, Pannuzzo is joined on stage by master guitarist Shannon Bourne, Hammond virtuoso Tim Neal and uber-musical bassist Zoe Frater. World-class musicianship, unbridled passion and an almost telepathic ability to create, Checkerboard are a powerhouse to be reckoned with. The spirit of the blues is palpable throughout their performances, all the while with an infectious and raucous sense of play.

From standing ovations at Wangaratta Jazz Festival to crammed inner Melbourne pubs, no two shows are the same. Vibrant and unforgettable, Checkerboard are a tour-de-force demanding honesty, integrity and truthful musicianship; the very essence of a live music experience.

Ever since their famed seven-year residency at the Great Britain Hotel in the early 90s, many budding young musicians have cut their blues teeth with the uncompromising fire of this band’s energy. Checkerboard has inspired the development of some of Australia’s finest musicians and bands (Powderfinger, Dirty Three, Clare Bowditch, Jet, Spoonful/Rocket Science, Kylie Auldist, to name but a few). Checkerboard’s point of difference has always been playing with a myriad of musicians and throwing them into the improvisational hot-seat.

Thirty years on, with the band’s strongest ever line up, Checkerboard continues to leave musicians and audiences enthralled by their single-minded creativity.

In performance, these guys listen hard and give 111% of the truth, creating seemingly rehearsed music from nothing.

You got it boy, it’s you

Carl Pannuzzo has been creating inspired, reckless and beautiful music just about his entire life. With the innovative and extraordinary a cappella trio, Acapelicans, he has toured the world. As a singer-songwriter he has for years been a familiar presence at folk festivals around the country. But as drummer and vocalist for Checkerboard he lets his first love, soul and blues music, run free. With uber-musical bassist Zoe Frater on bass, it’s a rhythm section-driven feel that brings a deep groove and joyous, raucous fire to the blues. Featuring the exceptional musicianship of Tim Neal and Shannon Bourne, their rapport and exchange is nothing short of inspired.

A veteran of Melbourne’s music scene, Shannon Bourne’s career began as a sideman to blues legend, Chris Wilson. Since then he has collaborated with and accompanied some of Australia’s most highly acclaimed musicians, including John Shumann, Vikka Bull, The Black Sorrows, Tex Perkins’ Band of Gold, Matt Walker, Broderick Smith, Jimmy Dowling, Kerri Simpson, Monique Brumby, Thomas Hugh to name a few. Career highlights so far have also included supporting Richard Thompson with Chris Wilson in 2001, being invited to attend SXSW in Austin, Texas (2010), and appearing in the Helpmann Award-winning show, The Man in Black starring Tex Perkins. A lyricist and composer of note, Bourne worked as a studio musician and co-writer with Russell Morris on the ARIA Award winning blues trilogy; Shark Mouth, Van Diemen’s Land, and Red Dirt – Red Heart.

Crowds love this band. Try them once and you will want them back every year.

Stay up to date on our latest News & Events